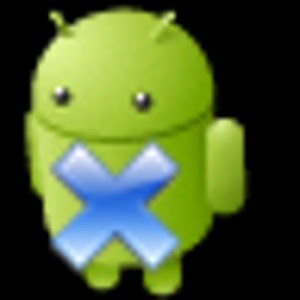 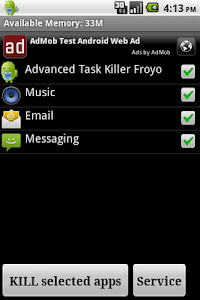 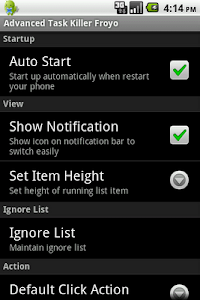 *Move to sd* cannot work with widget. If you move to sd, your widget cannot work.

Advanced Task Killer is also known as ATK. It is a tool to kill applications running. This is the beta version for Froyo.

ATK is often used to kill apps and clean memory. We do suggest people use ATK manually kill apps instead of auto killing apps.

It is pretty simple. Open this tool and take a look at the running applications list? Uncheck some apps you don’t want to kill (such as Advanced Task Killer and some system apps) Tap the button ‘Kill selected apps’, it will kill all applications checked.

If you don’t want to kill any application, you can tap it on the running applications list. Then it’s checking box will turn to gray.

3. Why there are programs running that I haven’t used or even opened?

Some applications will start up once you turn on your phone or be invoked by some events.

Ignore list is for you to ignore some applications you don’t want to kill. If you long press on the application listed on the main screen of ATK, the menu will pop up, then you can select ‘Ignore’, the application would be moved to ignore list. When you tap ‘Kill selected apps’, it won’t be killed any more.

5. What is default action for long press?

6. Why I lost my network connection after I tap ‘kill selected apps’?

This is because some apps related with network connection are killed. Such as ‘voicemail’. You can ignore it instead of killing it.

7. Why my Home reloaded?

This is because some apps related with Home are killed. Such as ‘HTC Sense’, ‘Mail'(if it is integrated with Home). You can ignore it instead of killing it.

8. Why I cannot receive notification of Email?

This is because you killed ‘Email’. Instead of killing it, you need to ignore it.

– Crazy: All apps except for apps you are using with.

You should be able to see Auto Kill information shows on the title, like ‘Auto-Kill: 12:20’. That means auto kill will start at 12:20, you can also change the frequency to impact the auto kill start time.
-What’s new
An option to put button bar at bottom or at top
Fixed FC bug

Note: For android 2.2 and later version, task manager cannot kill services and front apps, you have to force stop them. If you use task manager to kill them, services might restart, also notification won’t be ereased from the top bar. So we don’t suggest people use task manager kill them.